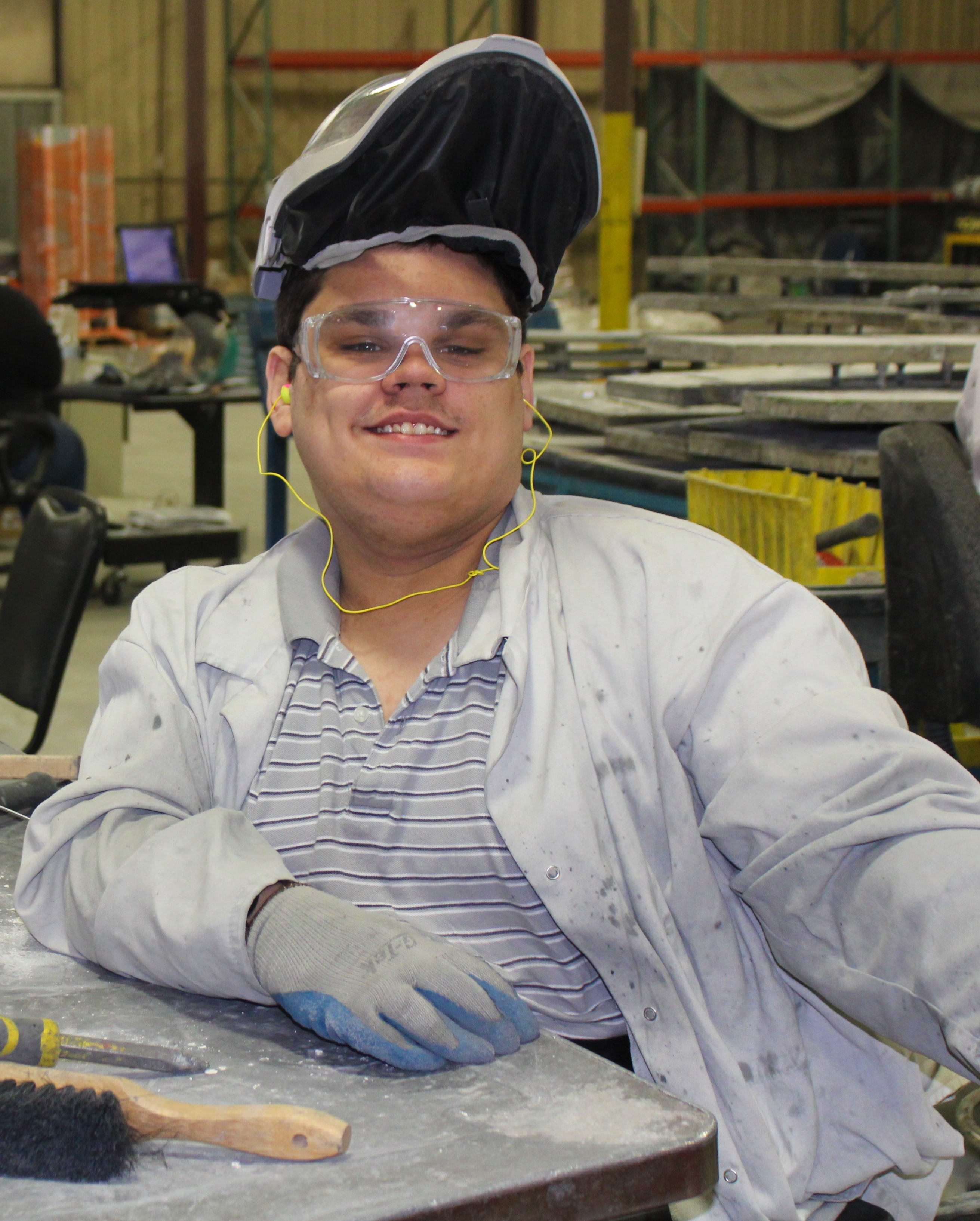 When Jonathan Armer enters a room, you know it. He is full of life and greets everyone with a resounding hello. But he hasn’t always been that way. Jonathan has Fragile X Syndrome, a genetic condition that causes a range of developmental problems including learning disabilities and cognitive impairment. His mom, Lori Armer, never wanted his disability to limit him. So she enrolled him in VersAbility Resources’ Transition to Work program for high school students. The Transition to Work program helps high school students with disabilities hone the hard and soft skills they need for success in work and life, and helps them successfully transition from the special education classroom to employment. After rotating through several jobs at VersAbility as the team worked to find a good fit, Jonathan found his work home.

Jonathan was transformed. His outbursts stopped. He walked taller and lost over 20 pounds. “VersAbility made Jonathan grow up,” Lori said. “Jonathan has a purpose and something to do. He loves bringing home a paycheck and is so proud to be working.” But there’s so much more to this story, to Jonathan’s journey, and to the impact the program has had on the family.

I remember sitting in the doctor’s office when we were told Jonathan had Fragile X Syndrome, along with his numerous medical problems. I remember feeling lost, scared, angry, hopeless. Jonathan was only 5-years-old. As parents, you know when your child isn’t reaching their milestones. You know something just isn’t right. But when you get the actual diagnosis, you feel your world has just been turned upside down.

One of Jonathan’s symptoms was aggression. He started attacking me at the age of two, and as you can imagine, the bigger he got, the worse it got. Our only focus was getting through the day and praying there would be no meltdowns. There usually was. We didn’t think about the future, we just wanted to survive the day. Trust me when I say there were many days we didn’t think we would. It was a fight every day to send Jonathan to school. Sitting in a classroom, being taught “academics” was just not for him. He got nothing out of it and he hated being there. Then Jonathan turned 16 and started high school and started puberty. How the Lord got us through this phase of life, I will never know.

His sophomore year at Denbigh High School, his teacher suggested that we put Jonathan in the Transition to Work program at VersAbility. My husband thought this was a great idea, but I was not having it. I worried enough with him being at a high school and now they wanted to send him out twice a week. Nope. My mother, Jonathan’s Nanny, and who is more protective than I am, agreed with me.

VersAbility ended up being the best thing for Jonathan even if the first year was a little rough. Jonathan had a hard time adjusting, and I was ready to give up. But his teacher and VersAbility were not. By the next year he was going to the Transition to Work program four days a week and even worked at VersAbility over the summers.

One day, I picked Jonathan up and as he was telling me about his day, he, for the first time ever, referred to having friends. I had to turn my head, so he could not see the tears (happy tears) running down my face. Jonathan also stopped having physical meltdowns. He was doing something he enjoyed. He was happy. He had a purpose. In June 2019, Jonathan graduated from Denbigh High School and he was actually able to sit with the 2019 class and walk across the stage in the coliseum full of people.